A mail tax can intervene in two different circumstances: the occurrence of a penalty or the justification for a provided service.

Penalties are associated with the following events:

Taxes justify a service provided in the following cases:

* The collection of receipts and other commercial values by post;

Taxation for the occurence of a penalty

Taxation for insufficiency of postage

The case of domestic mail

For the validity period of the Marianne de Béquet stamp, the tax is equal to the double of the insufficiency of postage, with a minimum tax (cf. Table below):

We can see that the minimum tax is lower for newspapers than for other objects. It should be noted that since the introduction of the two-tier postal service in January 13th, 1969, letters are taxed with regard to the non-urgent mail rate, except in cases where the sender explicitly mentioned the urgent nature of his sending by the mention "LETTRE".

The amount of the tax must be paid by the addressee, unless in the case of a refusal by the latter, in which case the mail is returned to the sender. 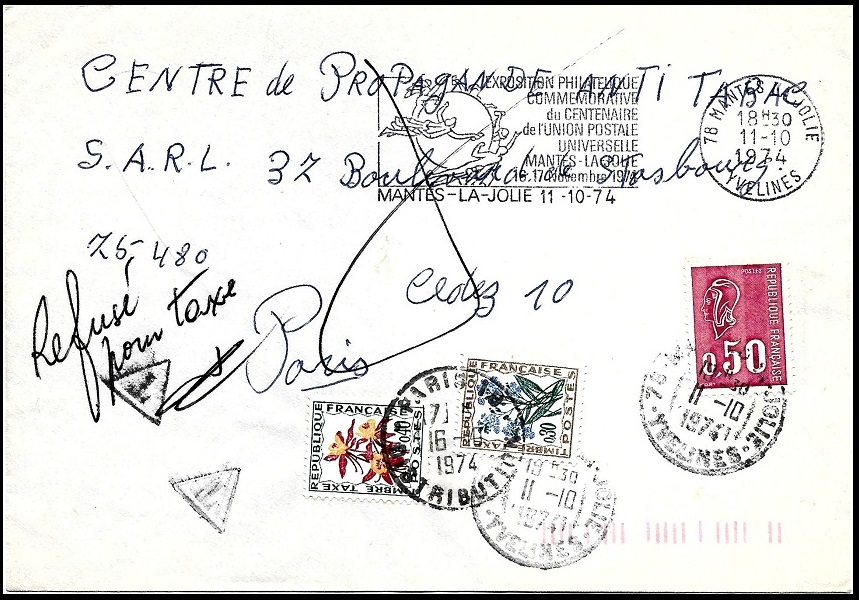 letter taxed at 0,70 F and refused by the adressee

On taxed letters, various marks affixed by the postman can be found, some of which are shown below:

Taxation marks which can be affixed by postman 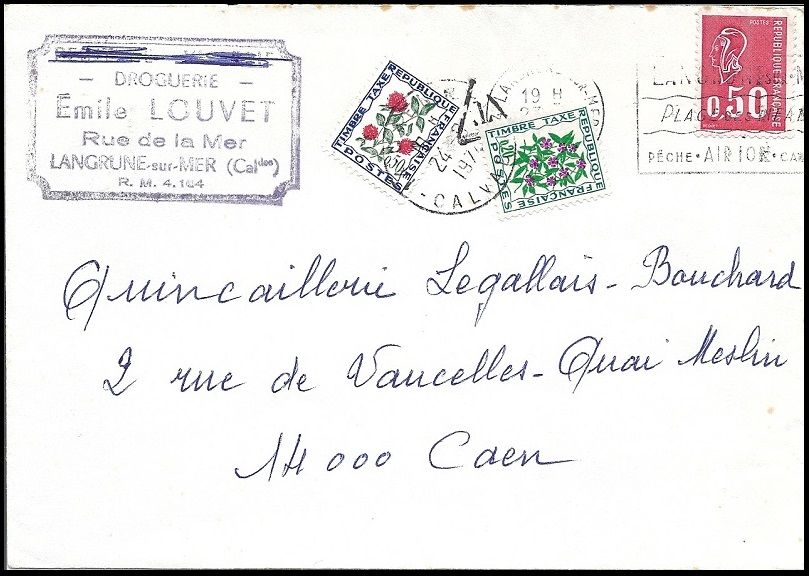 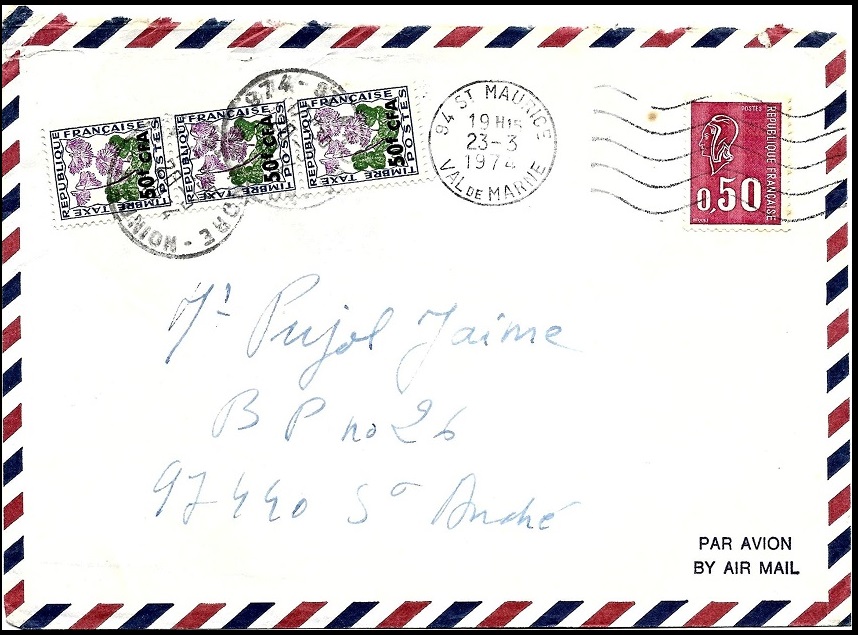 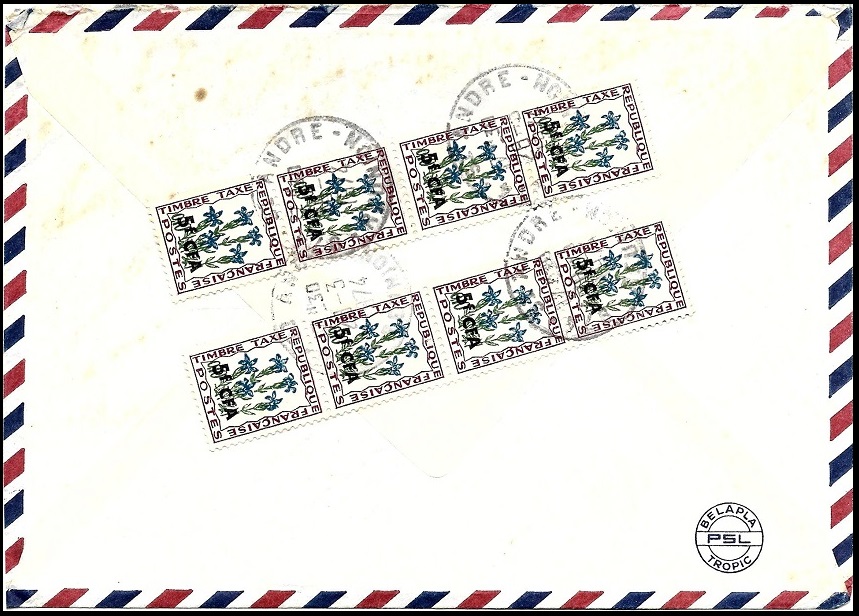 reverse side of the previous letter 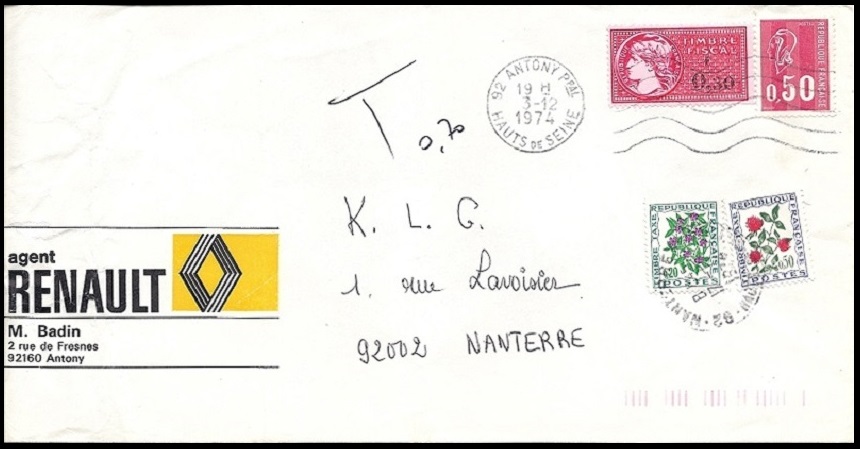 letter with a mobile revenue stamp and taxed

A letter with a 0,50F Marianne de Béquet stamp and a 0,30F revenue stamp. A revenue stamp is a distinctive sign whose purpose is to prove that a tax demanded by a public authority (state, General Council, municipality, …) has been paid. It could involve either a stamped paper or a revenue stamp.

But the payment of the postage stamp for a letter does not belong to taxes demanded by a public authority in the above definition. Hence the taxation of the letter at 0,70F, the minimum tax for the rate of 16.9.1974. 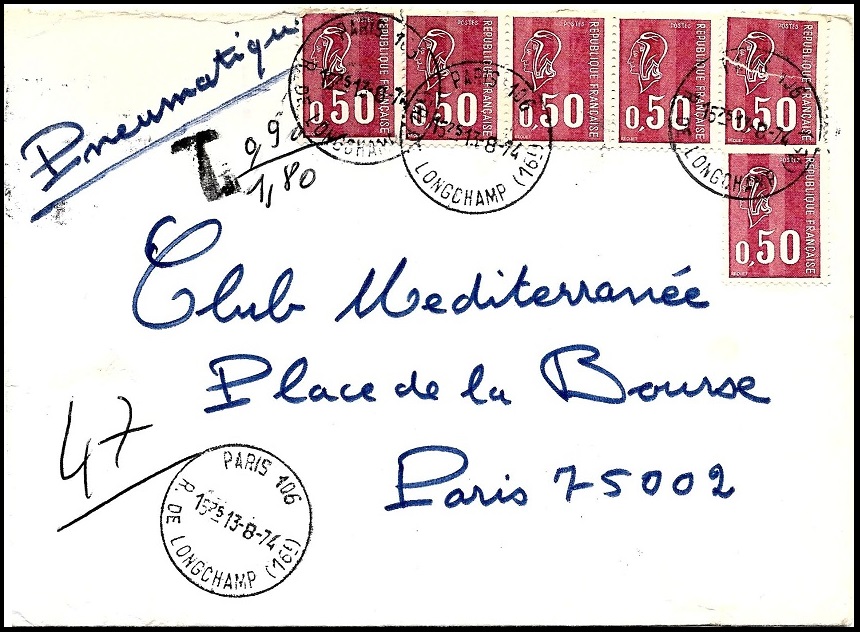 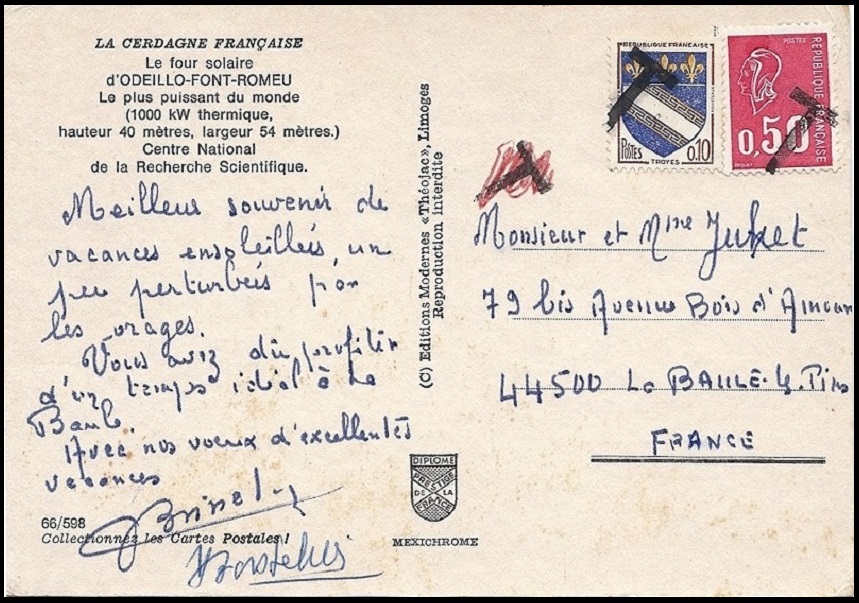 postcard without postmak ; the stamps are cancelled by the mark "T"

A curious postcard: stamps were cancelled by "tax" marks , and a 3 rd "tax" mark was cancelled. For an erroneous tax?

The case of mail sent to foreign countries

The rules for the taxation of international mail have considerably evolved since the 1st Convention on the subject in Bern in 1874. In what follows, I will only recall what is in relation with the period of validity of the Marianne de Béquet and which was defined during the Conventions of Vienna in 1964 (applied from 01.01.1966 to 30.06.1971) and Tokyo in 1969 (applied from 01.07.1971 to 31.12.1975). For more information on this topic , the reader can refer to the book written by G. PRUGNON Taxes et modalités de taxation de la lettre ordinaire dans le régime général international (1876/1975).

Mail not or insufficiently prepaid

Taxation rules in this case are as follows:

Here are two examples of the application of these rules: 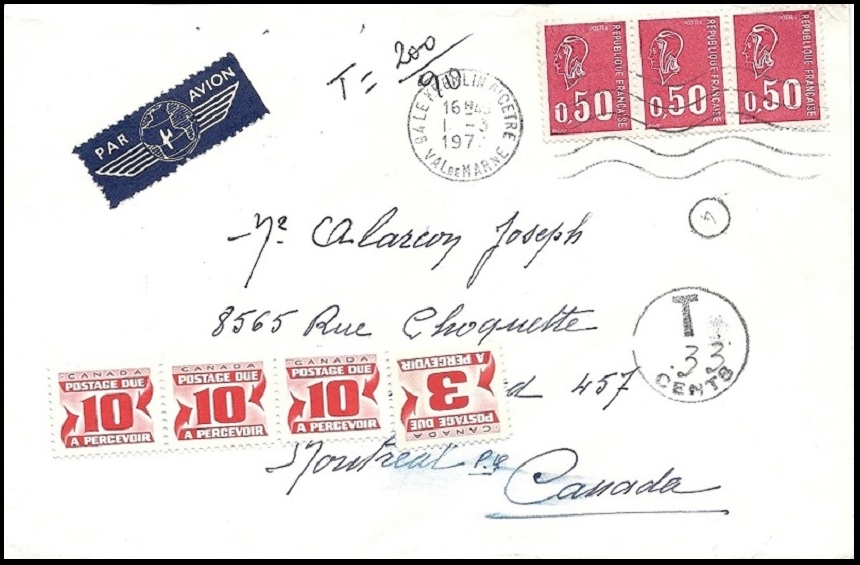 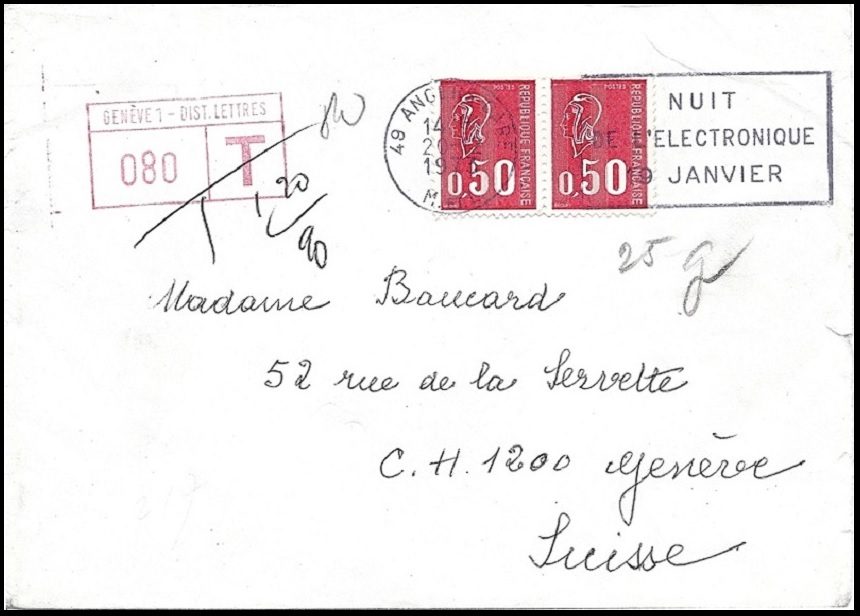 We can see on the above letter the mark "T" (handwritten here) and the fraction A/B. This letter is franked at 1.00F = letter rate of 1.8.71. This letter weighs 25g (pencil mention on the envelope) and the price of a letter of weight between 20 and 50g is 1.60F for Switzerland at the rate of 1.8.71. Hence the value of 120 at the numerator of the fraction and that of 90 at the denominator, tax applicable to the 1st weight scale of letters in the international regime. In Switzerland, the tax applicable to the 1st international letter weight scale is 0.60F, hence a fee of 120/90 * 60 = 80c.

Rules concerning the forwarding of a piece of mail have also been changed or amended in the various conventions of the U.G.P. and then of the U.P.U. held since 1874.

As regards to the period of validity of the stamp Marianne de Béquet, it can be noted that when the addressee has entrusted the task of forwarding to a third party, the latter may, if necessary, pay the additional postage (Ottawa Convention 1957).

This is illustrated by the following envelope: 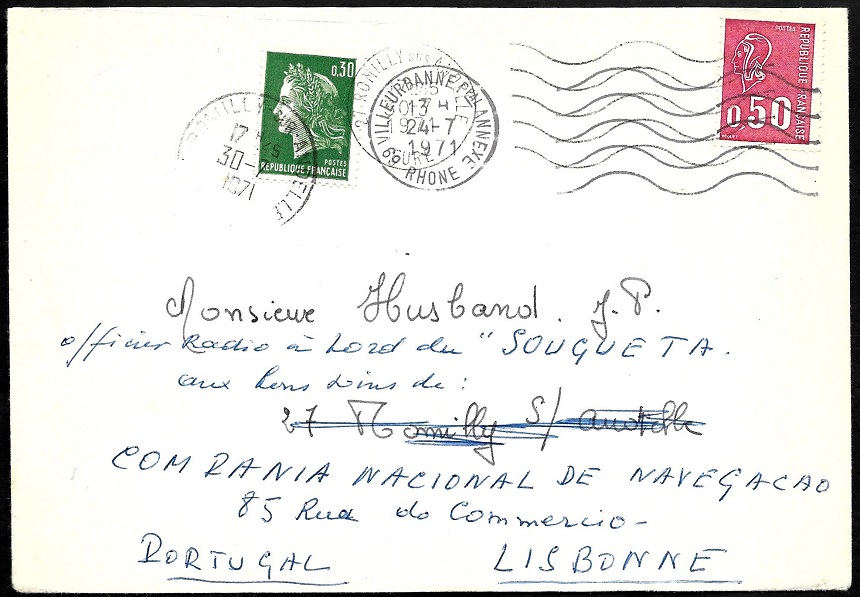 letter to Romilly in France and sent back to Portugal

The case of mail coming from foreign countries

The taxation rules are the same as for the mail destined to foreign countries. But there are very few circumstances where folds may include a stamp 0,50F Marianne de Béquet. However, I found two such cases:

We can see in this paragraph various cases of processing of such folds with a stamp 0,50F Marianne de Béquet. Below, we can see a case where the error was completely detected and treated. 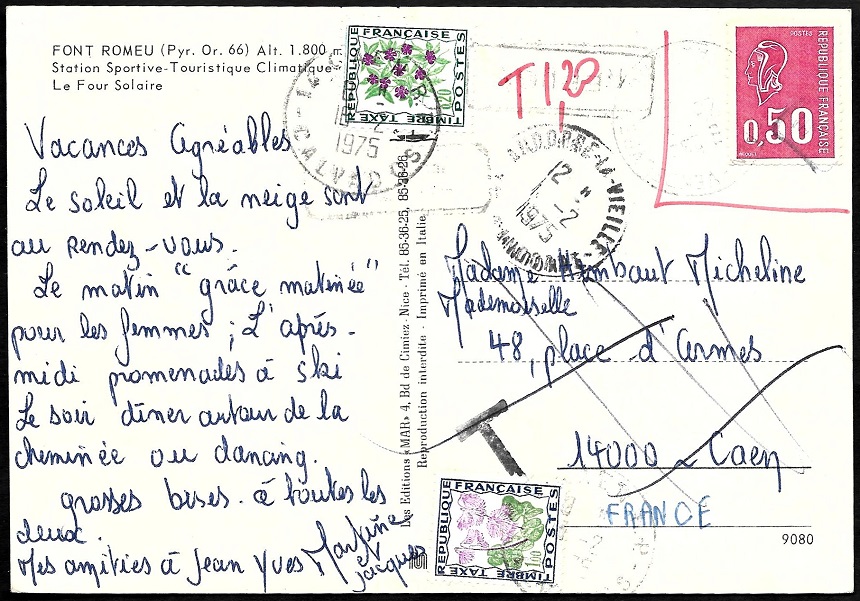 Letter posted in Andorra with a French stamp. The stamp was not franked and was boxed in red, the mark "T" was affixed and a tax of 1,20F was expressed by tax stamps (1,20F = twice the postage of a postcard in the price rate on 16.9.1974).

The following letter was posted in Spain and franked with stamps with a value of 5 pesetas. But the price rate of Spain towards France is 8 pesetas by that time, as indicated by the denominator of the fraction written with a pen on the envelope. 3 pesetas are thus missing, hence a 6-pesetas tax, as indicated by the numerator of the fraction. The 6-peseta conversion gives 0,65F. As the letter is sent “Poste Restante”, it is necessary to add a tax of 0,40F, giving a total of 1,05F tax. For some unknown reason (shortage of postage-due stamps?), this sum was realized by a postage-due stamp of 0,05F and 1,00F definitive stamps. 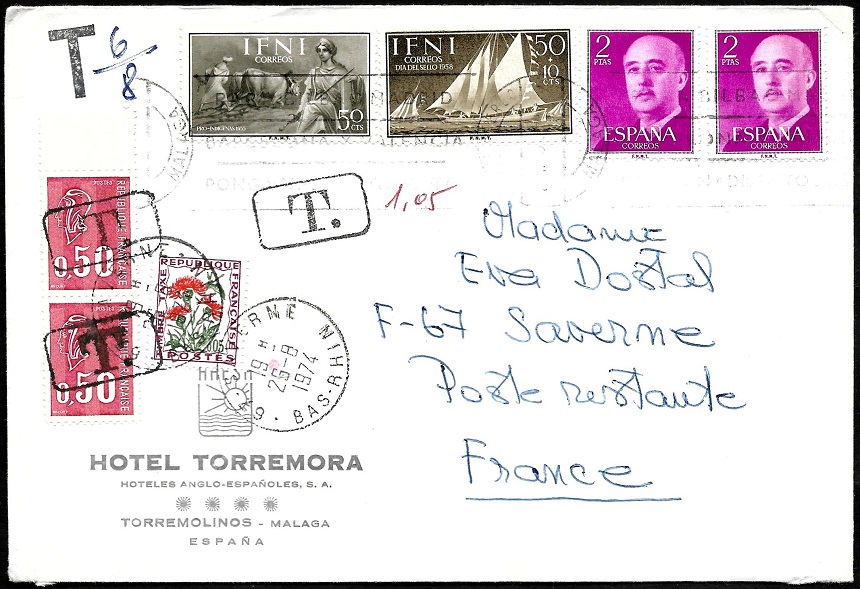 Letter posted in Spain and taxed in France with a tax stamp of 0,05F and two 0,50F Marianne de Béquet stamps

The law of March 29th, 1889 allows some public administrations (pension Armed Forces office, prefectures) to send non stamped letters the addressees of which will have to pay only a simple postage. This simple tax will be deleted January the 1st, 1996, as franking privileges. 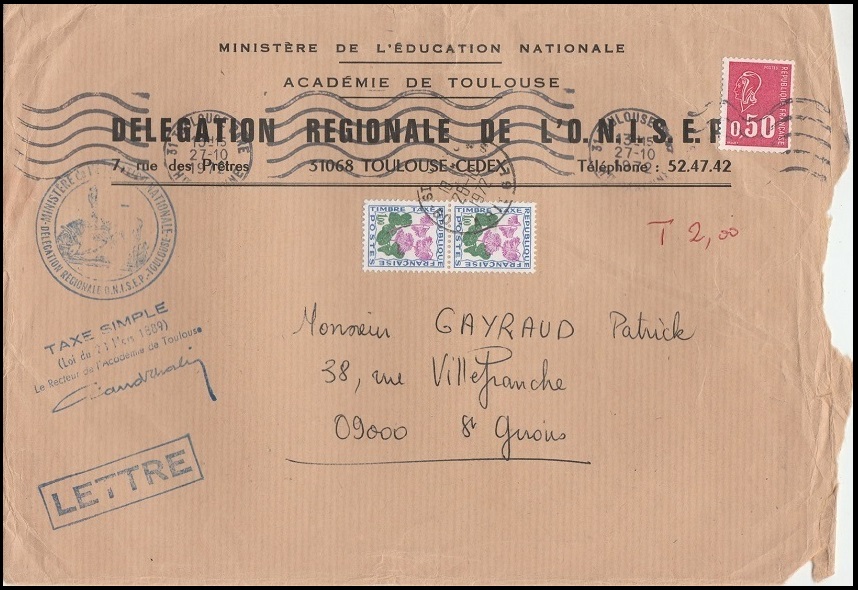 The above letter is not commonplace: this envelope is of the 4th weight step (weight between 100 and 250g). The cost of the postage is thus 2,50F at the price rate of 4.1.1971. As it is a simple tax sending (mark of the vice-chancellor of the academy on the left of the envelope) and as it was franked with a 0,50F stamp, the addressee will only have to pay a 2,00F tax. 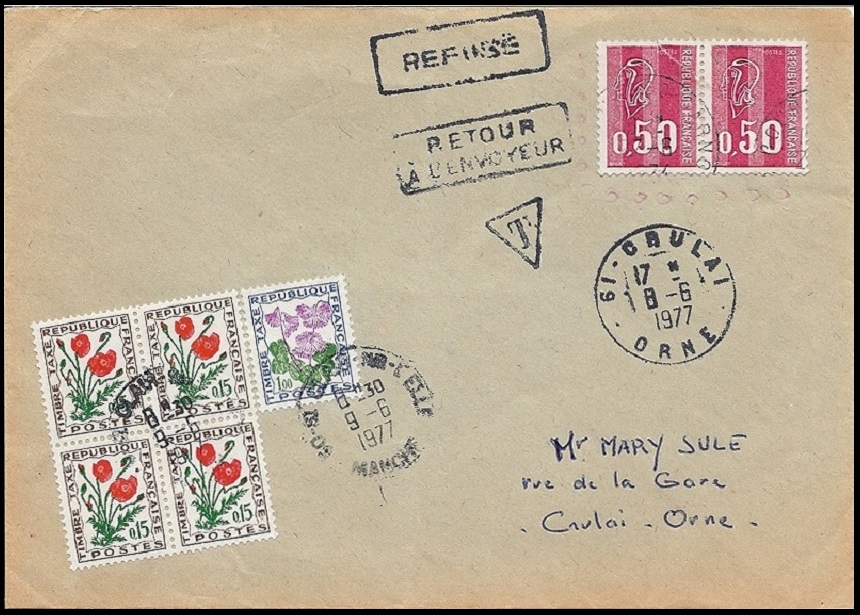 A letter with two 0,50F Marianne de Béquet stamps having already been used. This letter was taxed of 1,60F (twice the non urgent letter price at this date) and was the object of a ticket which can be seen below front and back. This ticket corresponds to the law n° 72 437 dated May 30th, 1972, which modified the article 144 of the penal code repressing the re-use of postage stamps. Since this date, because of the slightest gravity of this type of fraud, the legislator decided to "un-refer to correctionnel court" this re-use and to retain it only as an infraction repressed by the first paragraph of the article R.6 of the Code of the PTT. 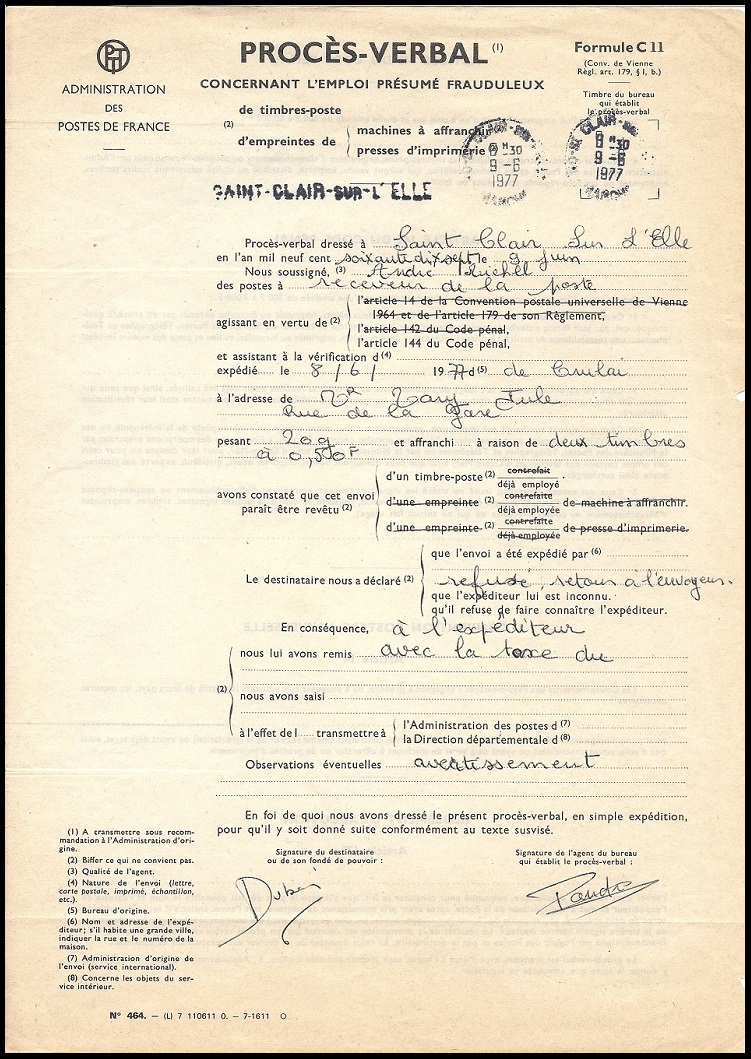 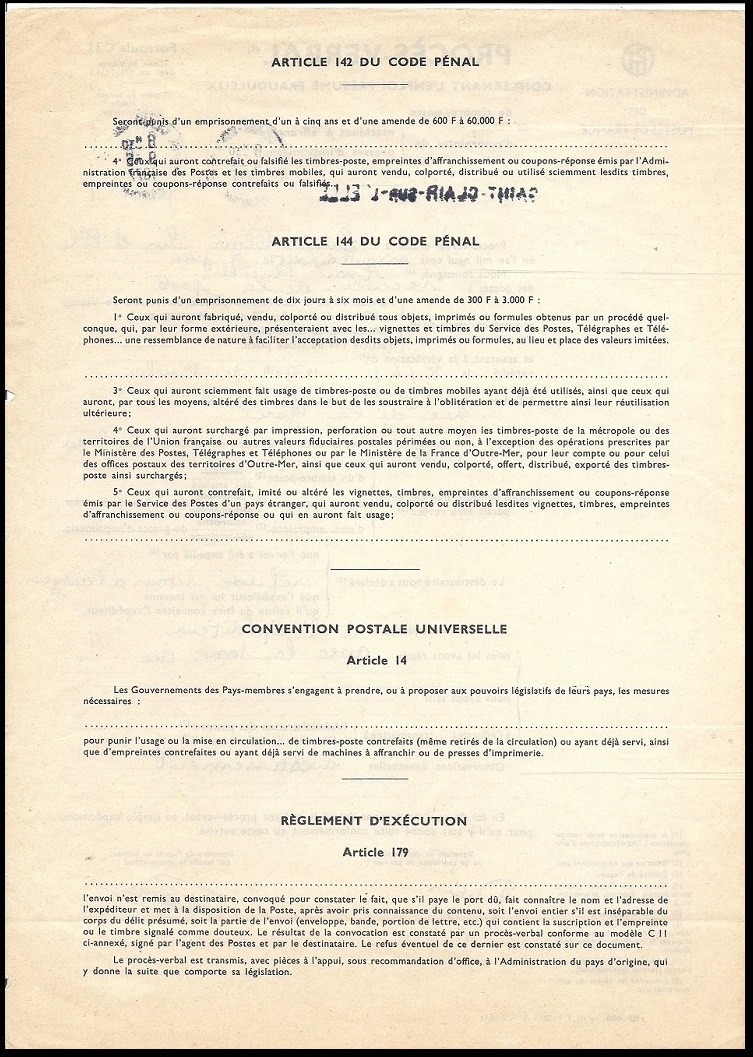 back of the above official report

Tax for justification for a provided service

Valuable service to be recovered authorized the collection by the department of post offices of receipts, invoices, bills, and more generally all free of charge commercial values payable in France. The price rates of this tax considerably evolved in time. From 1.12.1966, the rights are collected at the departure of mailing by stamps or imprints of franking machines. The tax consists of a right for every postal item, a tax for every value and a postage charge for the postal item. The payment can be made at home by money order or on a Post Office Account. In this last case, the price rate is lower. 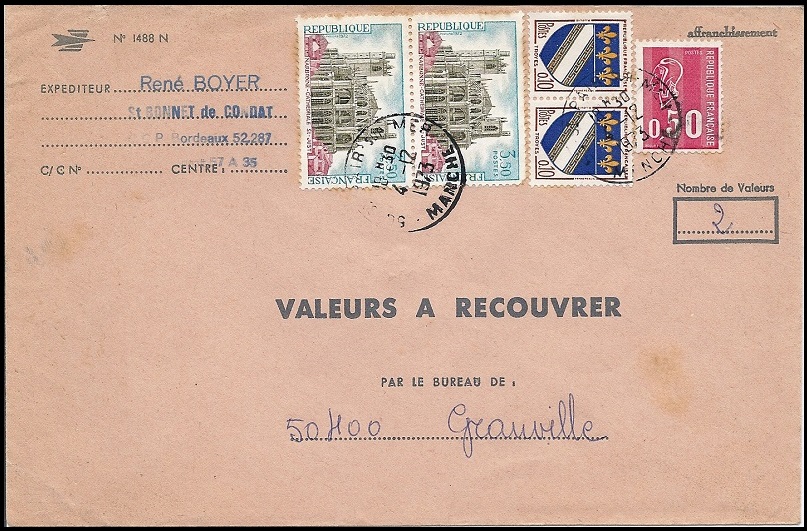 Poste restante is the service offered by La Poste by serving as a mailbox. By resuming a part of the order of March 29th, 1920, updated for price lists, here are the rules governing poste restante:

In the internal regime, the objects of correspondence of all kinds sent poste restante are liable, in addition to the ordinary tax of the postage, to a fixed fee which, in the price rate of 4.1.71 was 0,20F for newspapers and periodicals and 0,40F for other objects. This fee is payable either by the sender, or by the addressee. If the fee is paid by the sender, it is necessary to affix on the object 0,20F or 0,40F of postage stamps following the case in addition to the ordinary postage. If the fee is paid by the addressee, the office of arrival affixes on the object a 0,20F or 0,40F postage-due stamp. 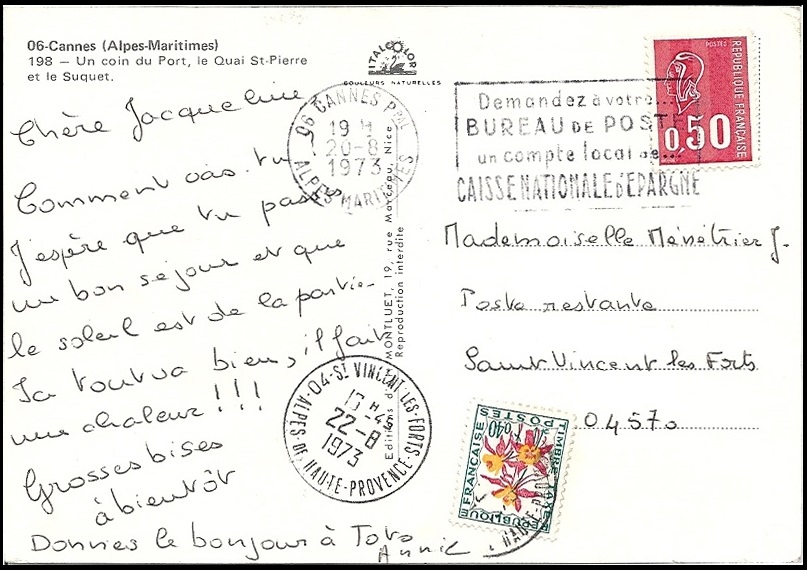 postcard adressed "poste restante" and charged at the 4.1.71 mail rate 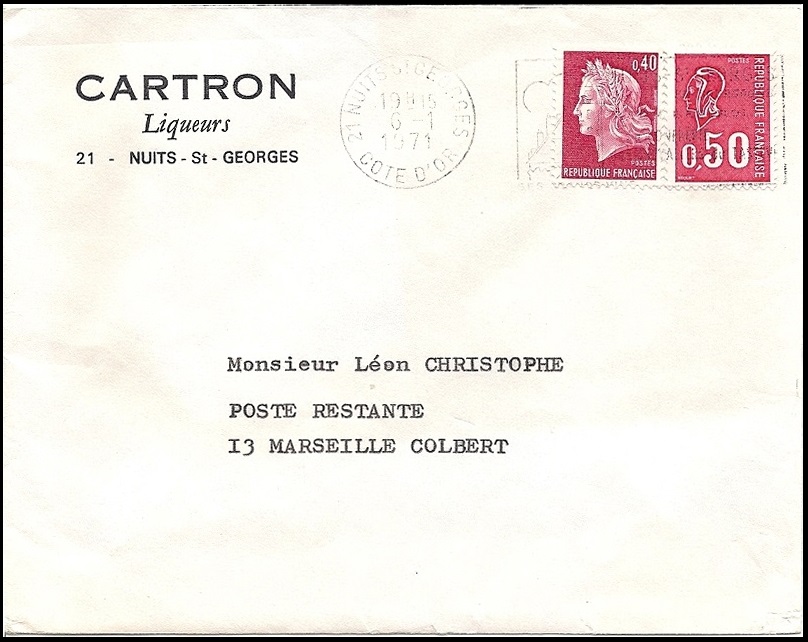 letter sent "poste restante", the 0,40F tax having be paid by the sender

When a registered or a declared value envelope did not reach its addressee, or is so presumed, the sender may make a complaint at the Post office by means of the form number 846. A tax for this complaint is collected by La Poste whose amount is that of an acknowledgement of receipt requested after the deposit of the envelope.

Customs can intervene in the case of mail items containing goods, at export or import. 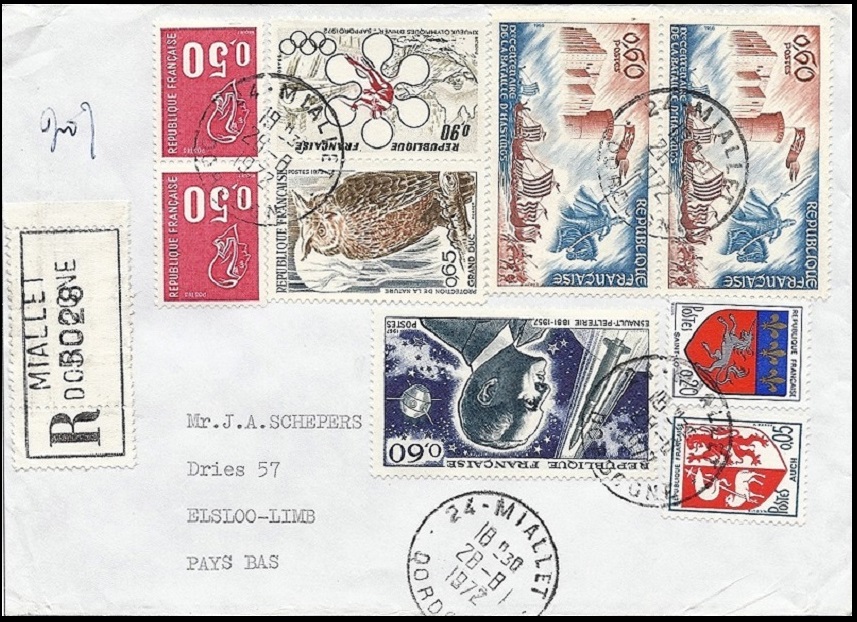 front side of a registered letter sent to Netherland 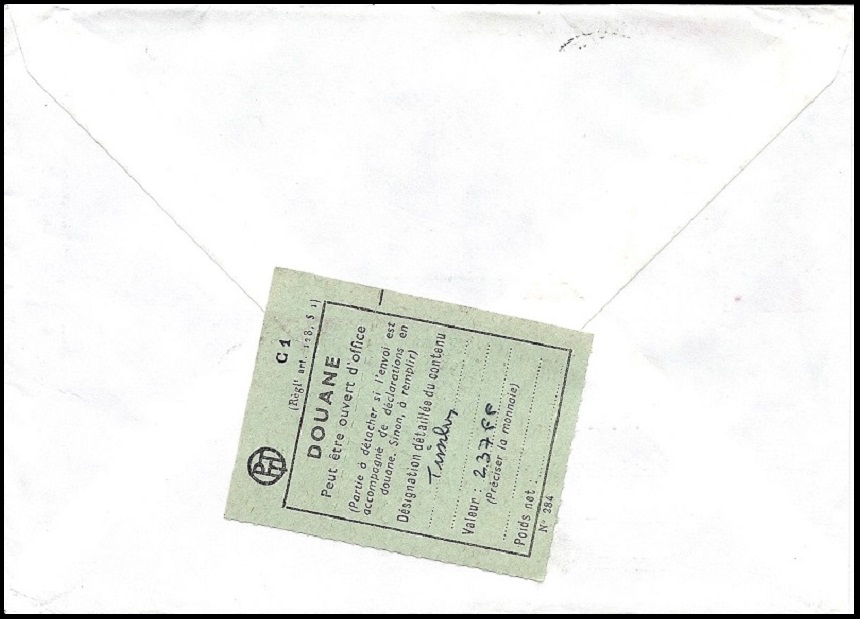