We saw in the Introduction to the various presentations of the stamp the definition of the notions of aspect and of variety. Thus let us remind that a variety is an accidental modification of one of the industrial components constituting the postage stamp. In this article, I will show a certain number of what I regard as a variety and I will try, each time, to explain the technical cause of the variety. As all the presentations of the stamp 0,50F Marianne de Béquet were produced by intaglio process, stamps marketed in sheets, booklets or coils will be considered in this article, since the technical causes of these varieties are generally similar.

Five kinds of varieties which could affect stamps 0,50F Marianne de Béquet can be regarded, bound to changes of the plate cylinder, to defects of printing, to the paper and to the gum, to the perforation of stamps and finally to the printing of phosphorescent bands.

Plate cylinder varieties correspond to damages to the plate cylinder such as dots, vertical coloured or white scratches, craters, ring-moons…

A variety such as a dot (also called mole, rock, fly,…) may be caused by a tiny clump of gum inside the turns of the paper reel which came to be stuck on the plate cylinder and which, after inking, leaves a mark after wiping. There is so a bump, which keeps non wiped ink around it, with a trail in the printing direction. Such a variety can also be obtained when a chromium particle comes off the plate cylinder and leaves, while being projected out of the printing unit, a small depression in the plate cylinder which will behave like a cut. 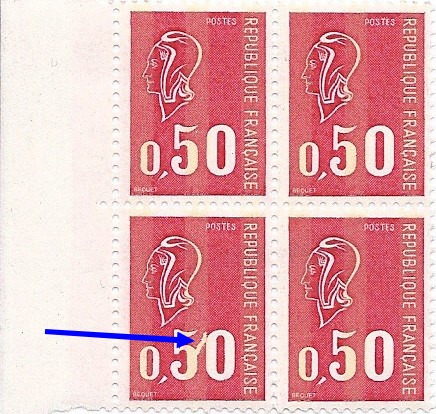 block of 4 stamps with one stamp with a white "caterpillar"

Vertical scratches are caused by a chromium particle coming off the plate cylinder and having been fixed on the wiping roller which makes, in turn, scratches on the form cylinder.

Craters are traces left by small asperities which were formed on the chromium film protecting the form cylinder.

Ring-moons are small non printed circles coming from chads sticking on paper before inking and around which a thicker ink deposit is formed.

Printing varieties concerns the incidents related to the printing of postage stamps. They can be due to inking or to wiping. Such varieties can also affect the overprints affixed to stamps.

This kind of variety corresponds in the event the inkwell is emptied and ceased supplying the rollers during a few moments. Partially inked stamps or albedos, where only relief is present, can be produced. 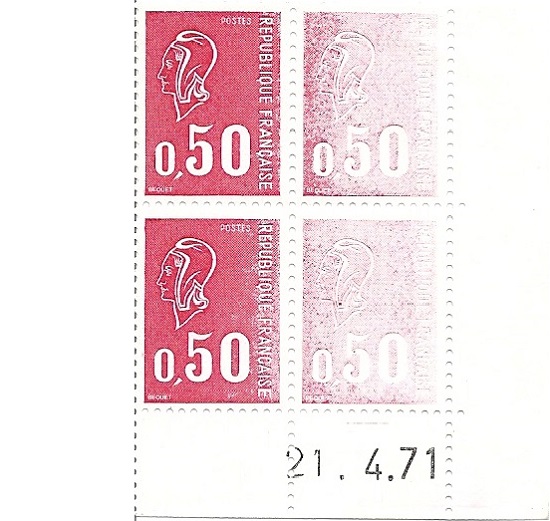 upper pane of a C7 booklet with 10 albinos 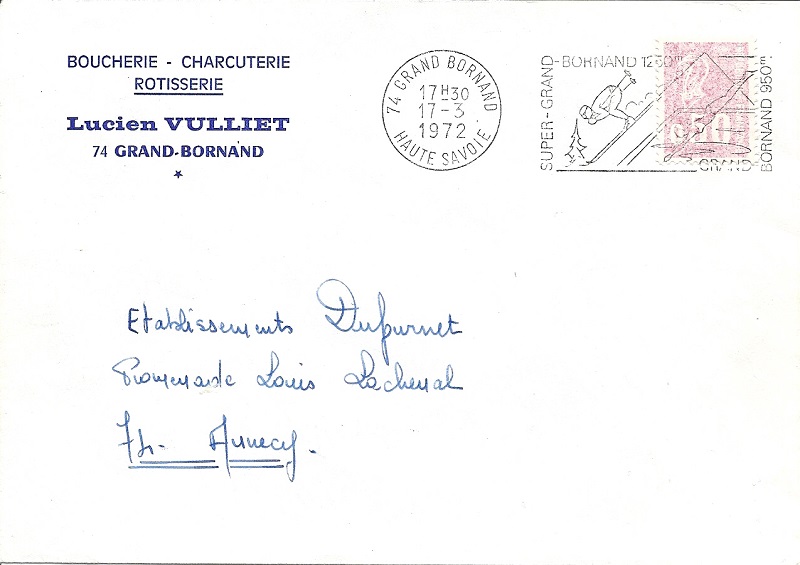 Varieties bound to the distributor cylinder

The distributor cylinder spreads ink over the touch roller. If it contains hollows, these ones will not receive ink and the touch roller will thus leave a white zone, as can be seen on the following example: 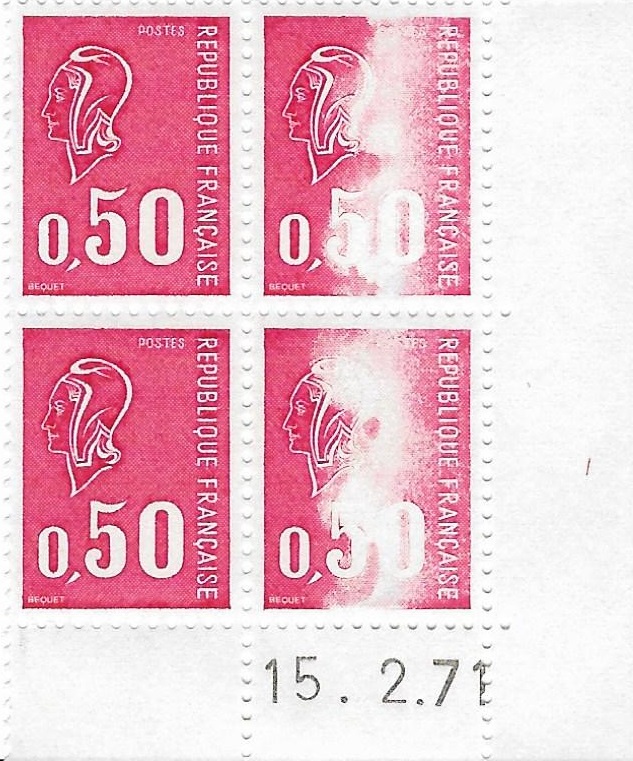 inking defect due to a bad distribution of the ink

This variety can be compared with the which looks a bit like it without having a similar cause.

Wiping rollers must eliminate superfluous ink deposited on the surface of the form cylinder to go about leaving only ink contained in grooves. If the pressure exerted by these wiping rollers is not correct, various varieties can be obtained:

There exist finally cases where one obtains colour bleed in the margins of the sheets.

In the case of overprints affixed by flat typography (which is the case for the stamp 0,50F Marianne de Béquet overprinted 25F C.F.A.), the following varieties can be found:

According to a paper by A. VAILLY in the “Bulletin du CAM”, the above item would result from the 25th printing: he would have seen a strip of ten stamps identical to the above picture with a ghost date 73 in the right margin due to an insufficient drying.

The marginal markings may be incorrect (non consistent year, non-working day) or partially inked or non-inked. 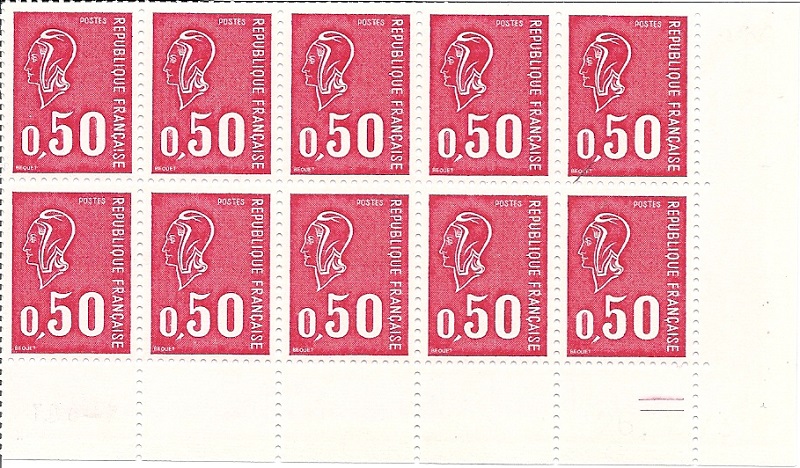 They are associated with everything that concerns the paper or the gum of the stamp.

Let us remind that two sorts of gums were used for the stamp 0,50F Marianne de Béquet, giving rise to two different aspects: the metropolitan gum (the most used thus also called normal gum) and the tropical gum, also called matt gum, used for the production of coils and for some printings for the DOM-TOM. 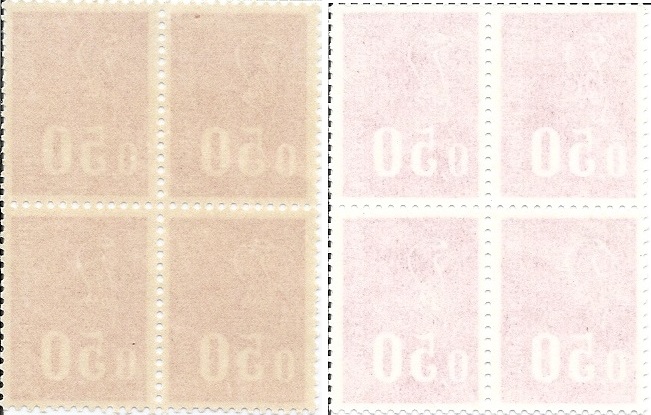 The main variety related to gum is a printed decal on the back of the stamp due to the stacking of sheets whereas ink is not completely dry. 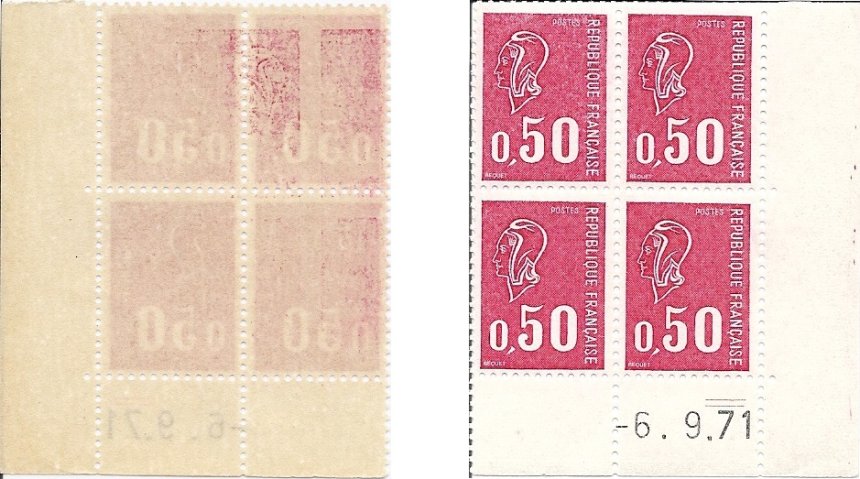 offset at the back of a pair of stamps

The most known type of variety in this category is the Zig Zag fold. At the time of its path inn the rotary press, the band of paper passes between two cylinders to be printed and is driven tensioned by a brake on the reel. Paper is is pulled flat state thanks to the tension, but if the reel is moved laterally for some reason, a crease appears during some printing time, always in the direction of rotation of the press, and continues during perforation. When the crease is opened, a more or less broad non printed strip appears.

A defect in paper making can also happen, which could be called “dough”, making an allowance during the printing of the stamp.

strip of 3 stamps with a crease (?) on the middle stamp

They are related to the achievement of the perforations of the stamps. These varieties can go from a simple off-centre stamp to accidental imperforate (attached or not to imperforate) and going through perforation between stamps. 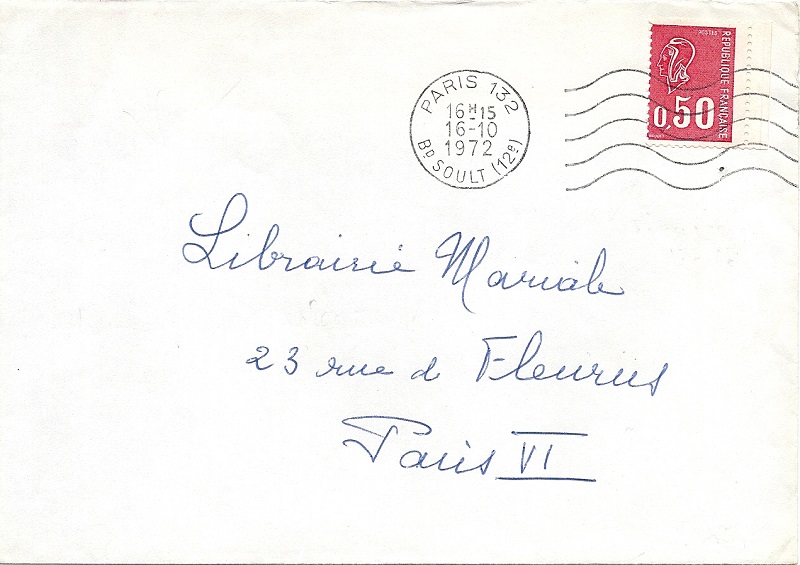 cover with an off-centre stamp without phosphor band 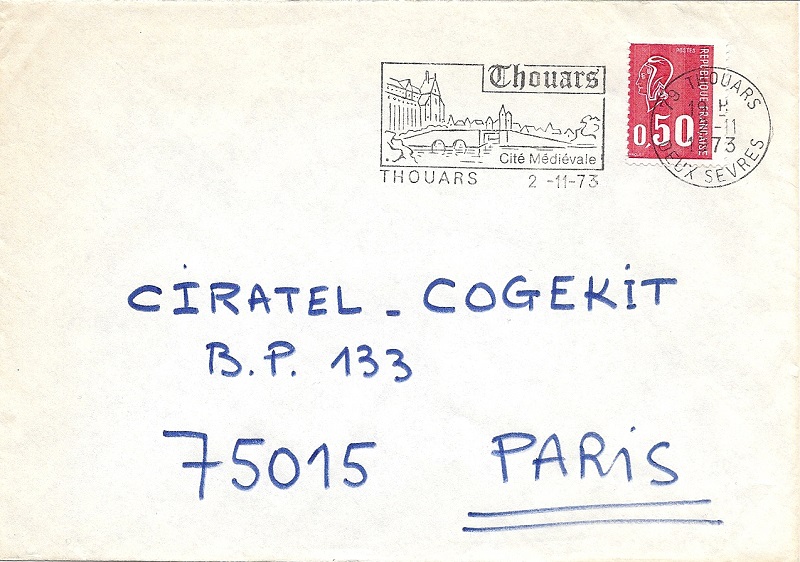 cover with an off-centre stamp with 3 phosphor bands

In this section, we will study varieties related to the 3 phosphor bands which were printed on part of the stamps 0,50F Marianne de Béquet.

According to a study of Le Monde des Philatélistes by Dr. Le Tensorer, G. Sohier and J.L. Madron, four groups of phosphor bands varieties can be distinguished:

In this group, phosphor bands are vertically and/or horizontally shifted:

Here, phosphor bands have “voids”: one can have breaks, a drying of the phosphor overprint, phosphorescent traces…

In this group, stamps have a number of phosphor bands lower than the number of bands of a normal stamp of the same issue (thus 3 for the stamp 0,50F Marianne de Béquet).

There exist booklet stamps with 2 phosphor bands due to an horizontal shift during the printing of the bands.

upper pane of a C9 booklet: the offset large phosphor bands can be seen on the left margin

photo under UV of the above booklet 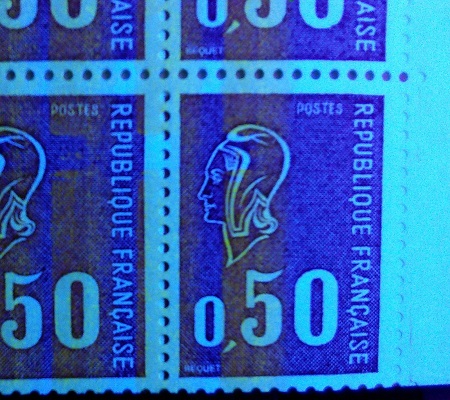