In this article, we will first explain the printing principle on a TD6 press and then the way sheets of stamps are printed on such a press. We will also present the notion of phosphor band and the four types of such bands known for the stamp 0,50F Marianne de Béquet.

Printing principle on a TD6 press

A six-colour intaglio printing machine (TD6 press) is made of two printing blocks of three colours, various items for additional printings, a perforator and an output device, either in the form of sheets or in the form of booklets (cf. the article Preparation of booklets).

The first printing block is an indirect recess printing one. This first printing will have no relief (this block generally prints swaths of colour such as backgrounds). The form cylinder is engraved and the image is upright. After inking with cut touch rollers and wiping, the ink is deposited by pressure, with images back to front, on a transfer cylinder in soft plastic which, in turn, deposits ink by pressure in the face of the paper, as in offset. Printing is then dried in an infrared tunnel.

The second printing is direct line-engraving. The form cylinder is engraved, with the image upside down, to have a printing of the image upright. Inking is obtained by three hand cut touch rollers. A wiping roller removes excess ink to leave it only in the grooves of the engraving. After a second wetting of the paper, the form cylinder directly deposits ink by pressure of an impression cylinder, itself pressed by a counter-pressure cylinder. This printing is again dried and rapidly cooled on contact with hollow cylinders in which some cold water passes to create a thermal shock.

Stamps are then perforated by a comb. On a TD6 press, a comb is made of two horizontal rows of pins with the sheet of stamps width and of 11 side rows. 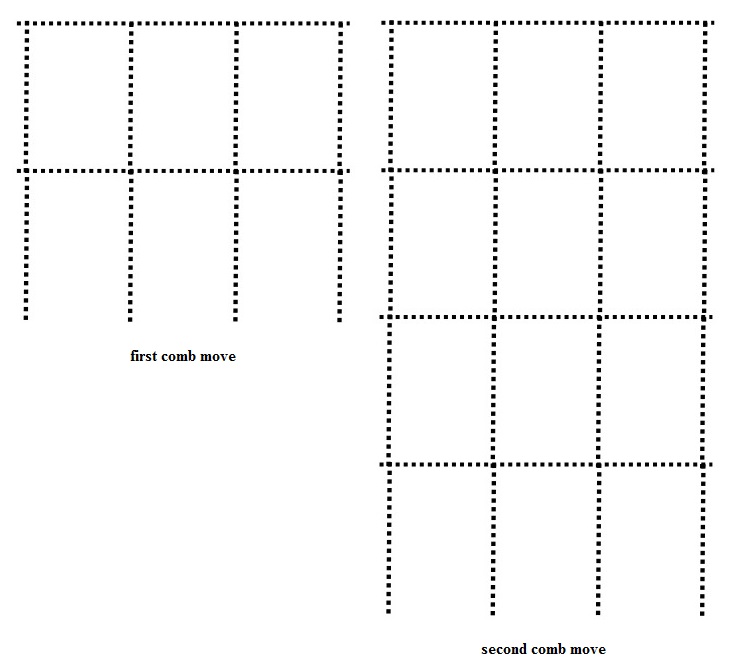 comb operation on a TD6 press

Phosphor bands (for printings with such bands) are then printed with some UV ink and immediately dried by an UV dryer. Several printing systems of these bands have been used, we shall return there farther.

Printer’s markings are printed in letterpress by a cylinder with the control number, the number of the plate used to print the sheet and the date. 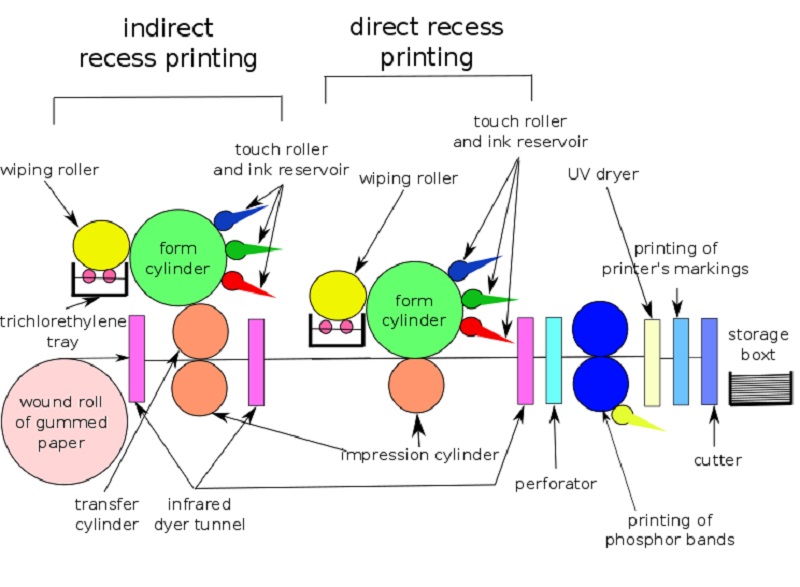 basic diagram of a TD6 press

A rotating cutting cuts each sheet to let them overlap on a conveyor belt of reception where it only remains to stack them by packages of one thousand.

It is always possible to only use a single ink reservoir to produce a monochrome printing (which is the case for the stamp 0,50F Marianne de Béquet). In this case, the touch roller will not be cut.

The drying, to avoid mixtures of colours and spots, is a major concern throughout the run on a TD6 press. A TD6 press has an infrared dryer tunnel and paper passes four times in this tunnel:

Finally, stamps, once printed, are sent as parcels of 1000 sheets, probably to one post office by department. For that purpose, the printing office of Boulazac printed labels which appeared on the sent parcels: 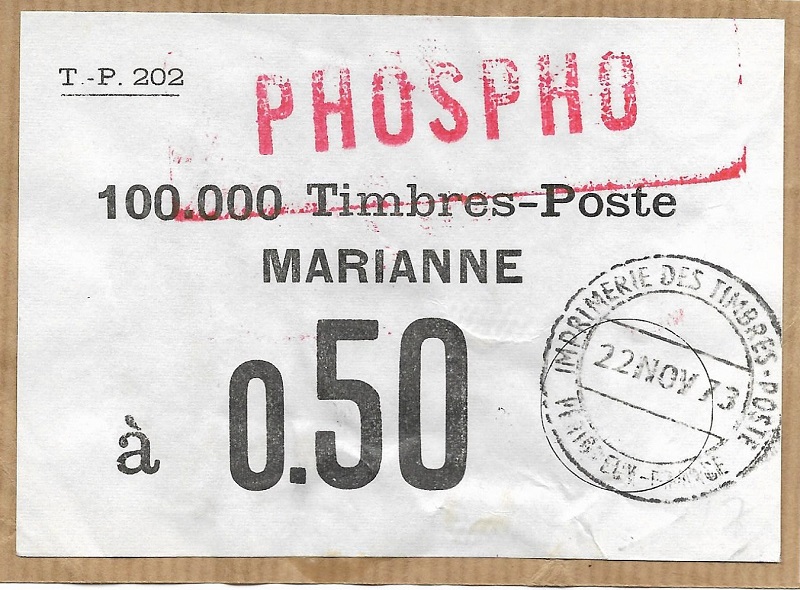 Every tour of the gravure printing cylinder prints bottom up three 100 stamps sheets, numbered from 00000 (= 100 000) to 00001, separated by a stamp height gutter, in which the guillotining of sheets will be performed.

The first sheet (sheet A on the figure on the left) has an {{electronic mark}} ( R.E. in French) on the left of stamp location 91 (it is worth noting that electronic marks are hand-engraved on the gravure printing cylinder to allow the electronic tracking of the second printing and of the perforation after optical character reading. Being hand-engraved, they have different shapes and are at different locations from each other with regard to stamps. This enables philatelists to describe and to study them). Sheet B has no mark and sheet C has two fine red lines under the stamp location 100 (for some printings, the two red lines are located in the left corner; for other editions, the two lines are not inked. This information will be given in the section about the description of printings).

Philatelists (cf. SOCOCODAMI's books for example) used to describe printings thanks to gravure printing cylinders and to characterize these cylinders by means of the two red lines appearing in the right corner of one in three sheets of stamps. We would like to recall here how these cylinders are characterized.

The two red lines are respectively called S (for Superior) and I (for Inferior). They are defined by the distances in millimetres between each of these lines and the bottom of the stamp situated just above (cf. the opposite image). For example, cylinder T is described on SOCOCODAMI's book on Béquet by:

Luminescence is the property that have certain substances to restore in the form of photons part of the energy absorbed during an excitement of a certain type (electric, chemical, mechanical, light energy,...). Fluorescence and phosphorescence are two different forms of luminescence: for fluorescence, the emission of photons is visible as long as the absorbed source of energy is active. For phosphorescence, the brilliance persists during a few seconds after the extinction of the source of energy, phenomenon which is called persistence.

Phosphor bands used for French stamps correspond to the above definition, ultraviolet light being used as source of energy of excitement, as shown by a note of the general management of the French Post authorities in 1973:

These bands are overprinted in letterpress or in flexography. 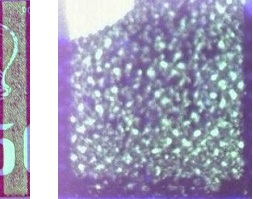 type A phosphor band seen under UV light on the left, magnified 60 times on the right 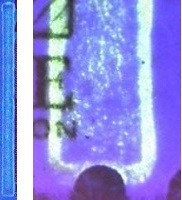 type B phosphor band seen under UV light on the left, magnified 60 times on the right 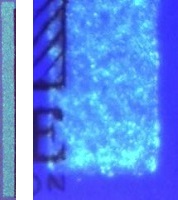 type C phosphor band seen under UV light on the left, magnified 60 times on the right 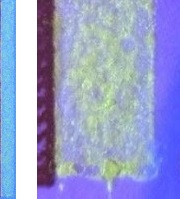 type D phosphor band seen under UV light on the left, magnified 60 times on the right